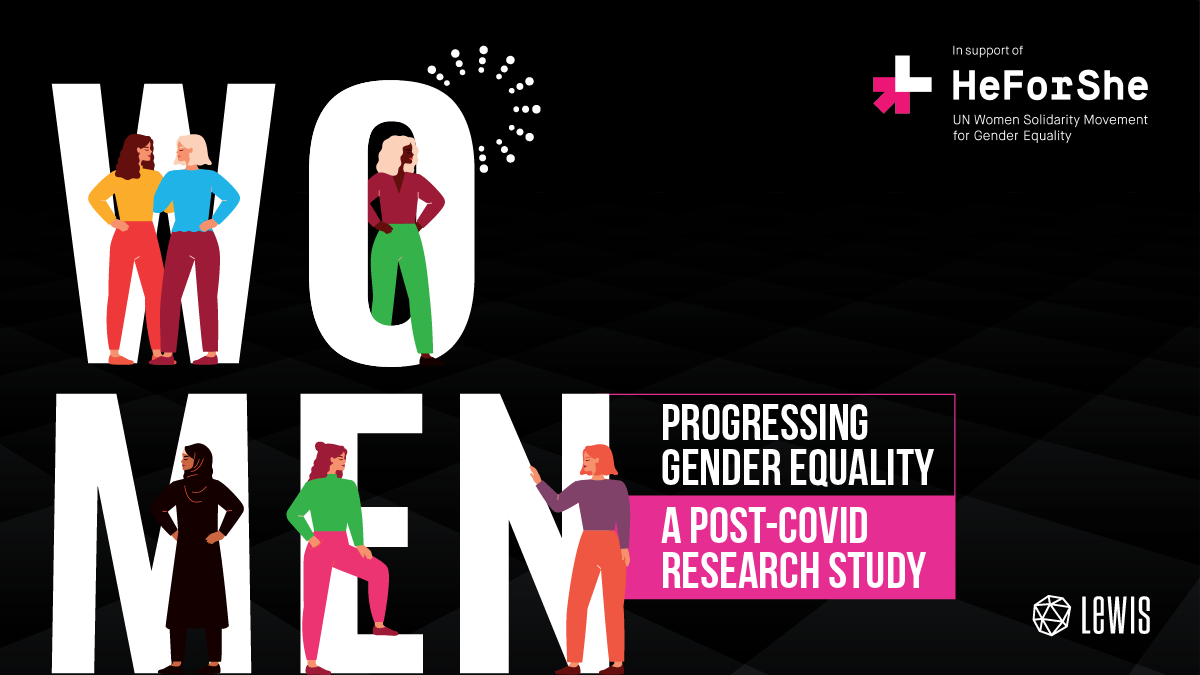 Majority of women want men to be more involved in helping to reduce inequities, which increased because of COVID

SAN FRANCISCO & LONDON, Mar. 3, 2021 – LEWIS, the global marketing agency, today revealed findings from its new global research on gender inequality, conducted in support of the global HeForShe movement. The report shows the impact and perceptions of gender inequities during the pandemic across 13 countries. The findings reveal an alarming trend: 98% of women want men to help address gender inequality issues, yet less than half of men indicated being ready to help.

“The problem of widespread gender inequality is no secret, but our latest research is a powerful reminder that the advances the world has made to combat this discrimination can be easily lost if we are not careful,” said Yvonne van Bokhoven, executive vice president at LEWIS. “We need everyone, men and women, to take steps now to empower women by speaking up, being allies and working to address systemic gender inequalities.”

Acknowledging the problem isn’t enough. Women are looking for active support to combat inequality.  Nearly 4 in 10 (39%) women say men should speak out against gender inequality when they witness it.  One third (33%) want men to take on more household duties.

The disproportionate impact of COVID on women is abundantly clear:

- More stress: 24% of women reported they were required to take on new duties as part of their job compared to 22% of men. Women also indicated seeing a greater increase in their housework and childcare responsibilities compared to their male counterparts.

-Fewer benefits: Male employees said they saw more opportunities for financial raises (13%) than did female employees (11%), and over a quarter of women agree they have been overlooked for a promotion because they have children vs 16% of men.

- Job insecurity: 14% of women surveyed reported being furloughed during the pandemic compared to 11% of men, exacerbating an already significant gap between employment and economic opportunities between male and female counterparts.

The survey also revealed that businesses need to address the stark contrast between how gender inequalities are perceived by men and women respectively:

- Lack of awareness: Male employees were more than twice as likely as female colleagues to say that gender inequality is no longer an issue facing women.

- Speaking out: Nearly half of women say they want men to speak out against gender inequality when they witness it and to listen more to female colleagues about the issue, while only 28% of men reported feeling the same.

“You don’t need to personally be a victim of discrimination to understand why we need to fight it,” said Chris Lewis, CEO of LEWIS. “It’s clear that men can – and should – do more to help. Our hope is this research will help shine a light on the challenges women face to make all of us stronger allies in the fight against inequality.”

“What this research emphasizes is the need to take action now more than ever” said Edward Wageni, Global Head of HeForShe. “COVID-19 has only exacerbated gender inequalities across the globe and we each have a role to play to ensure that not only do we build back better, but we also build back equal.”

About LEWIS
LEWIS is a global marketing agency built to help and inspire brands to grow. It provides a full spectrum of marketing, communications and digital services to deliver tangible business impact for clients. The company has over 500 staff across 24 offices throughout Asia, Europe and North America. www.teamlewis.com.

Created by UN Women, the United Nations entity for gender equality and the empowerment of women, the HeForShe solidarity movement for gender equality provides a systematic approach and targeted platform where a global audience can engage and become change agents for the achievement of gender equality in our lifetime. HeForShe invites people around the world to stand together as equal partners to craft a shared vision of a gender equal world and implement specific, locally relevant solutions for the good of all of humanity. For more information, visit www.HeForShe.org/en.

A Post-COVID Research Study report is based on a survey conducted by the LEWIS Research and Insights team to understand the impact that COVID has had on women in the workplace. The survey was fielded from February 16th – February 23, 2021 and captured responses from employed individuals located in the United States, United Kingdom, China, France, Germany, Spain, Netherlands, India, Mexico, Argentina, Brazil, Colombia and Austria. A total of 7002 respondents were captured and the overall margin of error is 1.17% at a 95% Confidence Interval. The respondents were sourced from OpinionRoute.